Today is interesting because I decided to start a blog. I've been fascinated by the idea of a blog for quite some time. I signed up for this blog thing, but have since not bothered to actually do anything with it. Blogging seems exciting, but also scary. As though you're really putting yourself out there. Anyhow, well, I guess I should start by introducing myself.

I'm Wanda, 32 yo and am a knitting fanatic. I live in Denver, CO, home to many wonderful yarn shops, much to my delight and dismany (only financially!). I learned to knit about 4 years ago by wondering into a yarn store and wanted to learn how to knit. I became so enchanted by all the wonderful yarns I saw that I signed up for a knitting class on the spot. I took the class and took to knitting like a duck to water. The rest is history. I don't consider myself an intermediate or advanced knitter, but nor am I am complete novice.

I have about 4 projects going right now. The highest priority one is for my nephew, arriving soon! My sister is pregnant and is due mid-May. The yarn I'm using is Sirdar Snuggly (DK weight) in a pretty periwinkle blue color that matches the bedding she's chosen for him. My nephew will be named Chason, which I think is so cute. I'm so excited to be an auntie! It's my first time. The pattern I'm using has 14 block sections and I'm currently on section 12, so not too much further to go. Here's a progress pic taken from last week: 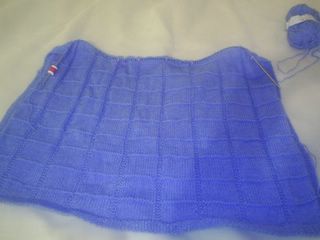 I love knitting socks and usually have socks in the project lineup. Right now I have a pair of socks I'm working on using a blueberry waffle sock pattern. Usually I do my plain vanilla stockinette sock pattern, but I guess I felt like doing something different with my sock. I usually am not much for stitch patterning or texture b/c most of my knitting is done while chatting with friends at a knit group, watching T.V. or otherwise engaged and not just paying attention to my knitting. My knitting is usually mindless knitting and I love it. Although this pattern did require a little more of my attention than usual stockinette, it wasn't too bad. I've got the first sock down, but haven't cast on for the second sock yet. Just trying to get the baby blanket done. But here's a picture of the completed sock. 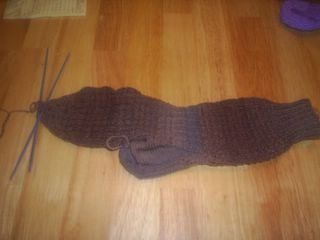 And another with a closeup: 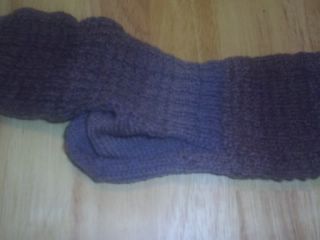 Before I wrap this up for today, last week I was ready to begin working on a hat for the dbf's son. He requested a hat with ear flaps and long i-cord handles hanging from the flaps. He wanted the hat to be in blue, with a red stripe. Since I'm trying (not very effectively) to not buy yarn, or use stash yarn, if at all possible, I knew I had some dark blue Gedifra Cordillera in navy blue. The yarn is an alpaca/wool mix and is very soft. I loved working with it. I have lots of it that I bought on sale from a now-defunct yarn store in Longmont, CO (Over the Moon). However, I didn't want to open bran-new balls of yarn when I had some yarn that a friend did a swatch of one ball on her knitting machine a couple of years ago and two balls that I knitted on a sweater in the round, that wound up being too small. I never ripped out the yarn and it's just been sitting there, waiting for me to do something with it.

So since I've read blogs of others ripping out yarn from old projects and soaking them, I decided to take a try at this. I read on Keyboard Biologist's blog on entry dated 1/3 where Teresa ripped out a project. Taking a cue from her, I ripped out the yarn and soaked in a tub of hot water with Eucalan with lavender oils and some Suave coconut conditioner for 30 minutes or so. I gave it a good soaking, pushing it down, but not letting it agitate. Then coming back and checking on it and pushing down again a few times. Here's a lovely picture of it soaking: 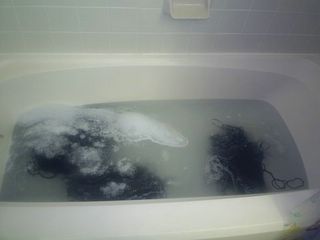 Since I frequently tend to skip past many of the instructions, I did not read the part of Teresa's post, which also links to another page, which shows where you hank the yarn first and then soak it. Then you hang it up to dry and then wind it into skeins. Oh, no, why would I do that? In my haste, I managed to just rip out the yarn. Which it did take me some time to get around to doing that (2+ years) and then I just dropped the baby in the bath water. Which made for lots of fun untangling the yarn while wet to attempt to hank it. But it did happen, see? :-) 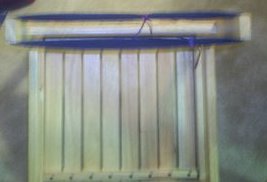 The yarn was dry after hanging it up on hangers in the shower by the next morning and was ready to wind up into center-pull balls, which I did. I then began knitting in earnest for a hat for the boy. I did finish the regular hat part of it, but haven't done the earflaps or anything else. He told me later (after I'd done the first stripe of which he indicated he wanted one red stripe in the hat), that he wanted several striped in the hat, so I added two more stripe sequences, but I'm not sure if he will like it. I will take a picture tonight to post for tomorrow.

Welcome to blogging. I like blogging better than knitting. But that's probably because I am a boy.

Yeah Wanda!!! Welcome to the world of blogging!! I can't wait to hear what you have to talk about! By the way, I'm going to be knitting down at Stella's on Pearl Street in Denver this Friday at 7:00pm. Try to make it if you can, Cathi and Michelle are going to try to make it too!

Welcome to the blogosphere Wanda! I love the blanket for Chason, you're going to love being a Auntie. Hank's one of my favourite people.
(you might want to invest in a spare ball winder)

Whoops, that last anonymous was me.
Little quick with the post button.

Hi Wanda--Congrats on your excellent blog!

Wow am I impressed! You've been blogginf for ONE day and you've already got fans. Glad the pics worked!

Good Job, Wanda...now you have gotten me in trouble.
Posting your photos like you did is very cool and seems painless sooo....I'll be baaack to figure it out and start one, I think.

Have fun and I'll be watching for more knitting photos.

Welcome to the blogworld! Me, too, I'm 33 and just learned to knit a few years ago .... you're projects look great! Jenifer http://knittingat5337.blogdrive.com

Look at you! Your first post, you have 8 comments and *2* of them are from Yarn Harlot. Look out world, here you come! :)

Hooray! Glad you started a blog. We're wicked enablers aren't we?
You have alot of patience to untangle wet yarn. I can't make myself do it. It would have just sat there in wicked knots till it dried at least (prob longer in all honesty).

www.flickr.com
This is a Flickr badge showing photos in a set called Finished knitted items. Make your own badge here.

Merrily I Knit Away 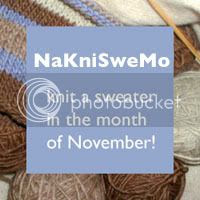